My apologies for taking so long to bring you the latest news from Taricaya and our jungle paradise. We have been incredibly busy and time has flown by as we continue to conserve and protect our piece of the Amazon, the world’s richest ecosystem. These past weeks we have restarted our motion camera survey, with astonishing results; continued our biodiversity research, received a visit from a National Geographic film crew and much more. As usual, where to begin? 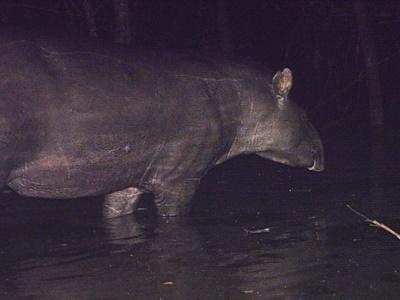 The use of sensor cameras is an excellent way to observe and record wildlife in an unobtrusive and non-threatening manner. These small machines are easily attached to trees and silently record any wildlife that triggers their infra-red sensor beam. We have used this survey technique many times over the years but the arrival of some new and improved models meant we could start up this fascinating project once again.

There are two ways to use these cameras in surveys. The first is targeting specific areas of interest and the second is systematically placing them along our trails as we know animals will often prefer to walk through clearer areas if not disturbed. At Taricaya we are very fortunate to have several points of interest known as “colpas”. These are special areas of mud and dirt that animals will come and eat to aid in the digestion and elimination of plant toxins from their bodies. Birds, such as parrots and macaws, generally prefer open areas with clear lines of sight to detect predators and so usually look for colpas on the banks of rivers. Mammals are much more secretive and will find areas deep in the forest where they take turns feeding on the life-saving clay.

With both techniques successfully used in the past we decided to split our cameras up and place one each at two of our colpas and the other four around our trail network. Both produced spectacular results! I shall not list all the amazing animals we saw and footage we captured but there was some exceptional footage. From jaguars (Panthera onca) and ocelots (Leopardus pardalis) to tapirs (Tapirus terrestris) and red brocket deer (Mazama Americana) the abundance of alpha predators and prey species indicates a very healthy ecosystem and further reinforces all our hard work protecting our 476 hectare reserve.

Before I change topic I must just mention that we caught on video something that has never been seen before. A collared peccary (Pecari tajacu), wild pig, attacking and killing a red howler monkey (Alouatta sara) at one of our colpas. This footage was as eye-opening and unexpected as it was brutal. Previous video clips had shown the peccaries spending hours at the colpa moving in and out at leisure, feeding on the mud and resting. After a few hours we started to see the monkeys coming down from the trees and shaking them at the peccaries clearly frustrated that they were not moving on and allowing them their turn to feed. This behaviour continued until one of the howlers became brave and started tugging at the hair on the peccaries’ backs. This continued for several minutes until one peccary turned suddenly, grabbed the monkey from the lower branches and tossed it to the ground. The next video saw the peccary stomping and biting until the monkey was dead. Unbelievable and staggering behaviour. The monkey was not eaten as we went and found it after having seen the footage. It was killed for bothering the stronger and more aggressive competitors for the enriched mud. I am not sharing any of this footage at this time as we are putting together a presentation for a primate conference later this year when we will show many leading primate experts something they never thought possible! 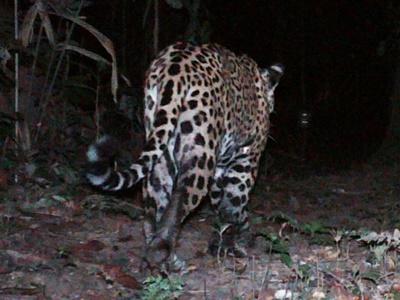 Our reputation at Taricaya as leading conservationists and the successful operation of the biggest and best wildlife rescue and rehabilitation centre in the country lead us to be contacted by a film crew from the world famous National Geographic channel. Coincidentally, they too were interested in colpas and animals that frequent them and whilst I cannot divulge too much information until the show is aired they joined us for several days and filmed many of our animals. The project is a long term one and will be a series of several shows and it was great to have them visit and see our work. The whole crew was impressed by our work and hopefully they will remember us in years to come! 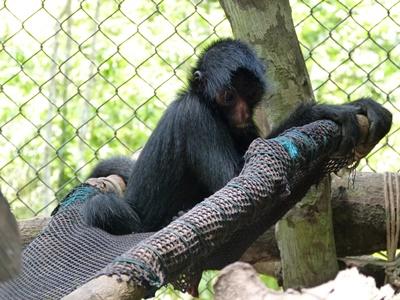 I cannot believe that I have yet more exciting news on this front. After a period of huge success in our ornithology research earlier this year I did not expect to be reporting on yet more new species for the area. But what do I know? Once again the rainforest continues to excite and this month we have registered two more new bird species in Taricaya. The first is a medium-sized hummingbird- the black-eared fairy (Heliothryx auritus). Very little is known about this elusive bird but it is one of a few humming birds known to actively hunt flying insects to supplement its regular diet. The second discovery was a colourful member of the duck family, the Brazilian Teal (Amazonetta brasiliensis). Our impressive list now totals 494 species and is the result of hundreds of thousands of hours spent in the field. Amazing! 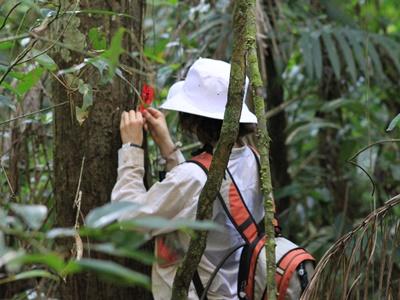 As we prepare for the busy time of year in Taricaya the extra numbers are even more helpful as we start to prepare for this year’s turtle project. Every June we must clean and prepare the artificial beaches and that means sieving the old sand to remove potential threats such as insect larva and eggs that once adults could attack our turtle eggs. Once this process is complete we then bring fresh sand from the riverine islands to top up what we have. We have been running the turtle project for 12 years and have successfully released over 10,000 hatchlings back into our rivers. This year I hope that we can continue our good work! We plan to start patrolling the beaches from the 15th July onwards.

Elsewhere at Taricaya we continue to monitor our released spider monkeys and study their behaviour and feeding strategies. Our two pilot farms keep us busy as we strive to maintain our timber (mahogany) and fruit plantations. With the busy season soon upon us there will be plenty more to report next time….until then! 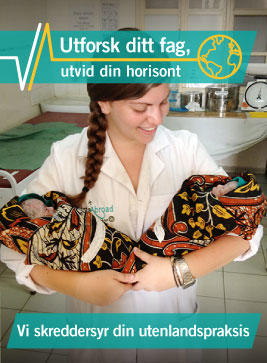