My name is Gabrielle Coburn and I am from Connecticut. I am a freshman at High Point University. I travelled to Belize this past March. I love to travel and I have always had a passion for community service, so when I found out about Projects Abroad, I was certain that I was going to give it a try. I was worried about getting accustomed to the culture and meeting and new people. However, once I arrived I realized that there was nothing to be worried about. 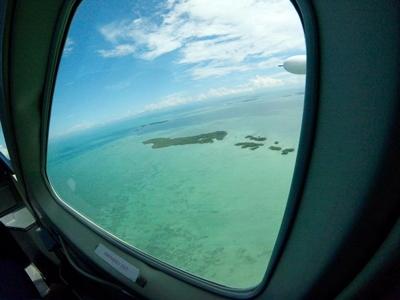 My roommate and I travelled from Charlotte, North Carolina to Belize City, from there we took a small plane to San Pedro. Upon our arrival in San Pedro we were picked up at the airport by Ashty, in a golf-cart (San Pedro’s main form of transportation). She was very welcoming and took my roommate and I to a local restaurant to experience the food of Belize. Let me just say, that was some of the best chicken and rice I have ever had. Halfway through lunch, my roommate remembered that she forgot to bring her own towels. But Ashty said that it wasn’t a problem, and brought us downtown to convenience store that had anything that we could possibly need.

After we picked up some towels and got a little tour of the city, we were brought to our home for the next week. I lived in a two-bedroom apartment underneath the home of my host family. My roommate, Anna, and I shared one bedroom and two other volunteers lived in the other bedroom. In this apartment we also had a bathroom and a kitchen.

The staff of Projects Abroad provided us with food and water, in case we ever got hungry when we were at the apartment. Later in the day, the two other volunteers who were living with us arrived. They were both also college students who attended Penn State and Fairfield University. After I talked to them for a while, we figured out that we know some of the same people, what a small world!

After we all settled in, we headed downtown to get dinner at a local cultural centre and restaurant. We were able to meet the other two volunteers, as we all got to know one another over dinner. It was so nice to have a place for us all to share dinner and talk about how excited we were for the week ahead of us.

My placement in Belize

During my time in San Pedro, I worked with ABC Preschool. I have always had a passion for helping children, so this was the perfect placement for me. The first time we visited the preschool, we did a lot of different activities with them. Anna and I went around to each classroom and brought the kids pictures of the Easter bunny to colour because Easter was coming up in a few weeks. It was so interesting to me to see how excited these kids got over colouring a picture of a bunny.

They were so interested in making the picture colourful and showing me how good they were at colouring. I noticed a big difference in the younger class compared to the older class. The younger class would scribble all over the paper, talk about how good their picture was and then want to play a game with me or Anna. However, in the older class it was apparent that they were more concerned about colouring in-between the lines and having the “best” picture. Spending the day colouring with these children really taught me how to appreciate the little things in life and to not just overlook them. 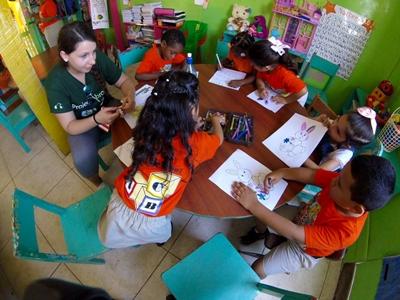 The second day that we were at the preschool, the other volunteers and I painted a mural on a wall behind the swing set. The purpose of this way to brighten up the playground and provide the kids with a beautiful environment to grow in. I don’t really think of myself as an artistic person, so going into this project I wasn’t really sure what to think. However, after a long day of painting, some spills and some frustration we painted a beautiful mural. It was incredible to see the difference from before and after the mural was there. It really made the area more inviting. I never thought I would be able to say I painted a mural, but I did!

After school was over, the kids came running out and they were amazed that we painted that for them. They loved all of the colours and they were so grateful. I am so happy that I was able to leave a piece of me at that preschool.

Another eye opening event was when we were given a tour of the island. Whenever I had previously travelled to an island I would stay in a resort and not leave the grounds. When they showed us where people were living in San Pedro I was astonished. We drove a golf cart down a bumpy, garbage filled road only to find more garbage surrounding all of the homes that people were living.

I had heard about communities like this before, but to see it with my own two eyes was completely different. After seeing how these people were living, I couldn’t help but want to make a difference in their lives. I felt so bad about complaining about the luxuries that I have at home, when most of these people would only dream of having what I complain about.

Another project that we did while we were in San Pedro, was working at a local food/donation bank. While we were there we sorted through donations that had come in so people could come and get clothes for their families. The donations ranged from women’s and men’s clothing to children’s swimsuits. It is nice to see people in San Pedro given back to the less fortunate that live right near them. Others also packed up bags of food for people to come pick up, who couldn’t afford food. I had worked at a food bank before through my church and it is honestly such a good feeling knowing that you are ensuring that some people won’t go to bed hungry. After we finished at the food bank, we went down to the local dog shelter.

The island of San Pedro has many, many stray dogs, which is why the dog shelter is needed. We were able to take some of the dogs out on a walk down the beach. I love dogs, so I was so happy that I was able to show some of these lonely strays some love. 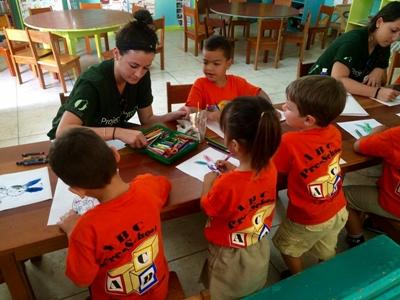 Although the main purpose of this trip was to work, we did have some fun as well. Anna and I were able to spend some time at the beach that was right down the street from our apartment. The beaches in Belize are beautiful and I am so grateful that I was able to spend some time at them. We also had free time after lunch most days were we could explore town, go to the beach or rest. One of my favourite places that I found in town was this little chocolate store. They made all of their chocolate fresh, so it was amazing. I was able to get a chocolate shake and a brownie and eat it right on the beach outside of the store. Projects Abroad also planned a day for us on a catamaran. This was one of my favourite days. We left in the morning and sailed for about an hour.

Then we were able to go swimming, snorkelling, or just tan on the boat. After that we sailed to another island off of Belize, where we spent a few hours. On this island they had restaurants, shops and a beach. This day was such a good day to bond with all of the other volunteers and to meet new people as well. I’m so glad that we were able to spend time exploring this beautiful island. I also really enjoyed being disconnected for the week.

Well almost the whole week, the first two days I didn’t know my data was on. However, I soon found that out after I got a call from my dad about a $75 data bill! Lesson learned, turn off your data when you get to another country. After I did turn my data off, I felt a weight off my shoulder because I didn’t have to worry about texting or social media. There was WIFI though at different spots, don’t worry!

All in all, my trip to Belize is one that I will never forget. The staff made it easy for me to accommodate to this new country and they made me feel safe. I learned so much about myself and the beautiful city of San Pedro during my stay. I am so glad that I decided to do an alternative spring break. There is no better feeling than traveling and giving back to others. I felt like I actually had a productive spring break, I don’t think that many college students can really say that. Thank you Projects Abroad for the experience of a lifetime, I can’t wait volunteer with you again! 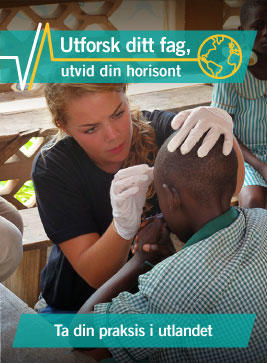