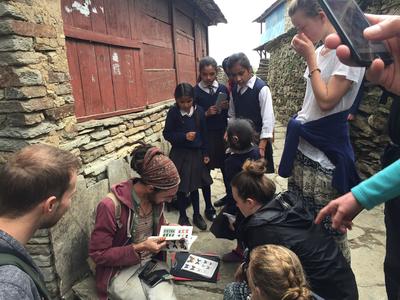 Travel is the most impactful way to change your world. It is often hard to pin down what inspired you to turn off an exit or get on a plane to circle the earth. In the case of choosing Nepal, though, I would chalk it up to my Uncle Carl. As a child, I would visit his house and he always referred to his garden as Shangri-La. Carl passed away almost 16 years ago, but that's the thing about romance and storytelling – the stories you tell create ripples in a body of water, but you'll never be able to tell how far those ripples will go. I've heard it called the "magic of the arts".

So why did I choose Nepal? Why not stay home in the USA? Why go to a land where I barely knew the language? Why subject myself to flights, bus rides, and anything else that came my way? I'll tell you. I've always believed that the most progress can be made on the edges of the unknown and the biggest impact can be made when we delve into the unknown and, with that mind-set, I left the US in search of Shangri-La.

Novalis, a German philosopher, was once asked, "Where are we going?” His reply was, "Always home." I don't know if I've ever felt that saying was truer than during my travels. From the pick up at the airport to the coordinated trip to get from Katmandu to the town of Ghandruk (located within the Annapurna Mountain Range), It was clear I had placed my trust in a great organization. I met Projects Abroad’s Nepal Conservation Coordinator, Sam, the day before we went up to the Himalayan foothills. He’s a tall British botanist who is full of energy and curiosity. Sam came by my hotel to introduce himself and make sure everything had gone well. It was a step outside his job requirements. The Projects Abroad coordinator had taken a short holiday but the staff of Projects Abroad were still there to explain to me where we were headed and what to expect.

Over a drink by the lake in Pokhara, Sam explained the nuances of the work ahead. The accommodation up to this point had been a standard hotel room. It had a TV, outlets, and Wi-Fi to my heart's content. I found the accommodation to be equal to (if not, better than) what I would have booked in the US. The schedule for travel allowed for a chance to explore the city of Pokhara in the morning before meeting Sam back at the hotel for a jeep ride to Ghandruk.

As pavement gave way to gravel, and gravel gave way to dirt, the Annapurna Mountain Range appeared behind clouds. We bumped our way along, stopping for permit checks and to pick up any other passengers headed our way. We reached where the road ended and I turned over my heavier bag to a porter. We walked up the mountain to the Namaste Inn. We trekked up the hill and crossed under a gate welcoming us to Ghandruk. After another 10 minutes we were in the yard of the Namaste Inn. I believe “inn” may be the wrong word for the place. An inn offers a bed, a warm drink, and a meal. The Namaste Inn offers so much more. All of the happiness and life that it offers all flow from one person in particular, Amma (“Grandmother”) Didi. She’s a woman of infectious happiness, even if I could only speak five Nepalese words at most. Amma Didi started her day before us and she was always a ball of joy and energy. 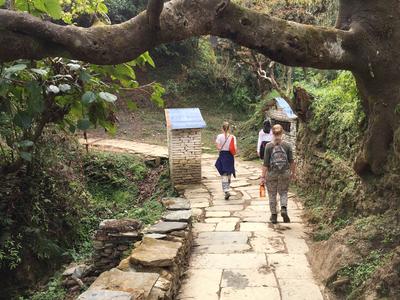 The Namaste Inn was cloaked in clouds for the first few days I was there. Lurking behind the grey fog, I knew there were the mountains I had come to see and I wondered when they would reveal themselves. The vistas would have to wait. There was work to do. Along with Sam, I met the guides that Projects Abroad employs at the site. First was Raj, an expert birder and a playful leader who enthralled us with his enthusiasm and knowledge.

My first morning was spent with Raj and the group of six Namaste Inn volunteers doing a bird survey. After the wakeup call from Amma Didi, we assembled for a pre walk meeting and then headed out on a trail. We made sure to walk clockwise around the stupa (done for good karma) on the road, up into the trees, and off to explore the Annapurna Conservation Area. As a North American birder, I was about as helpful as a child who points and says, "There’s something". Luckily, with my eye for movement and the help of Raj and the other volunteers, the morning bird count was a success. We returned to the inn for lunch and tea. As a Southerner, hot tea still confuses me, with the American South being a stronghold for cold sweet tea.

The next day we took a proper trek to Little Paradise, a 4-hour climb past waterfalls and houses that are probably older than my country. Accompanying us for this trek was the other local guide, Biswas. Like Raj, he had grown up in Ghandruk and had tramped this forest since he was young. We had a lunch of dal-bhat (a wonderful mixed vegetable dish that will power all your adventures) and tea, as a fog rolled up the hills, but not before we could take in the view from this small mountain respite.

After our break, we continued up the trail to do a proper botany survey. Sam shared that Annapurna Conservation Area is likely the largest Rhododendron forest in the world, but it hasn't been measured yet. We took a detour off trail and found the coordinates to set up grids. In a tree above us, a Languor Monkey observed our work and then disappeared into the mist. The survey consisted of measuring trees’ width and height, measuring shrubs, checking soil coverage, and recording the data.

The weekend came and gave me a chance to explore the town. I never found someone who could tell me how long it had been there, but I’m sure it was over 1000-years-old. Sam picked up some of the newcomers and took us to a local Gurung clothing store. I purchased a book on the Gurung, but have yet to read it. We covered our western clothes with the Gurung shirt and belts, tucked in our Kukris, and posed for pictures while Sam clicked away.

The mountains finally revealed themselves on Saturday morning. I was always awake before Amma Didi did her wakeup call and I sat on the porch looking at the Fishtail Mountain and the rounded snow-capped precipices. In that moment, I felt the sublime calm that draws one to such places. I wish I would have had more time there. 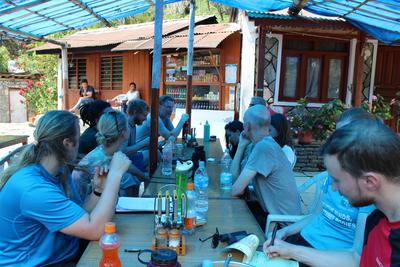 We went on even more hikes. The mountains would come out in the morning and by afternoon the moisture would build into a thunderstorm. We hiked down to the river that comes thundering out of the ice above and visited the Ghandruk weather reservoir where it seemed the whole field was aflutter with butterflies. There were at least 230 Graham Blues! On the walk back from the butterfly count, we heard horns, drums, and cheering. We followed the sound until we found ourselves in a celebration, which we were quickly invited to. There was music and dancing and it was clear that I may have found the Shangri-La my uncle always talked about in this little village in the foothills of the Himalayas (although my uncle’s version had far fewer steps).

When I add this experience to my résumé, scat analysis will be the first bullet point. During a day of data entry, my experience with Palaeontology finally became useful. Sam handed me and Kate (another volunteer) a bag that contained Cloud Leopard scat. I quickly went to work sorting through the barking deer fur and finding small bone fragments and trying to reassemble the meal that went with the sample. After about three passes and confusing Kate thoroughly, I had reassembled about half a mouse. I chose Projects Abroad exactly because it offered this type of experience and training and I was not disappointed.

The trip home began sooner than I would want, but that was a decision made before I knew where I was going and what I would find. I met Ashmita, another Projects Abroad staff member, in Pokhra and she assisted me on finally getting a SIM-ready phone. She even sped me around town on her scooter. Because of my flight times, I had a couple of days to explore Katmandu, take the rickshaw rides, haggle at booths, and just breath in the incense burning at the many temples and shrines throughout the city.

In Nepal, I found an Amma and Babba (“grandfather”) that opened their home to me and took me in as family. I found an organization working on the edges of science and the 21st century to do work that desperately needs to be done. It is a truism that you never know what you had until it is gone. I feel that my time working at Annapurna Conservation Area with Projects Abroad added a small bit to the knowledge of what we have. Another truism is that there are tourists who pass by things, rushing from point of interest to point of interest, never truly seeing the place around them, while travellers stop, breathe in the air and slow down to meet the people that make those points of interest special. After only a week with Projects Abroad, I’ve realized that it is a great way to be a traveller and not a tourist. 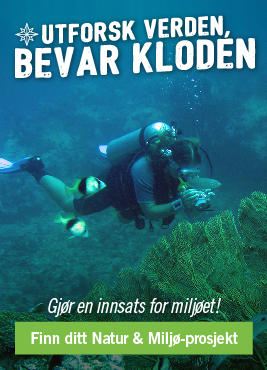